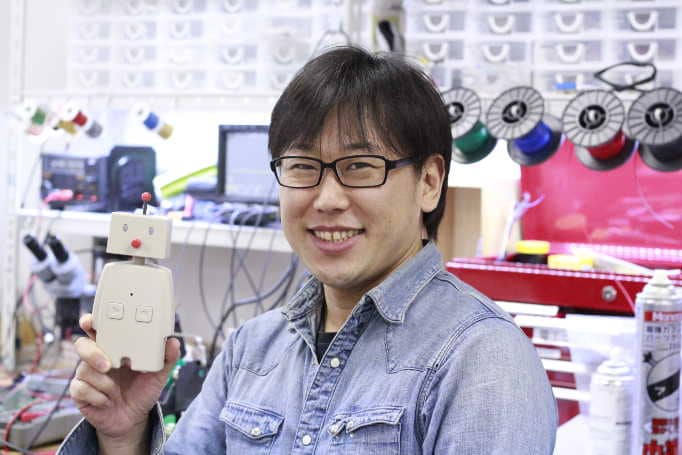 Japan has a long fascination with human-like robots. Literature, cinema and anime are filled with them, and perhaps not surprisingly, a large number of Japanese startups are focused on making anthropomorphic robots. I have to admit, that this fascination never really made sense to me until Shunsuke Aoki, CEO of Yukai Engineering explained it during this interview.

We talk about Bocco, Yukai’s new social robot, and dive deep into how the robotics industry is changing. And how developments in both artificial intelligence and the Internet of Things might make social robots not only possible, but positively necessary.

It’s a great conversation, and I think you’ll enjoy it.

The following is a summary. You can hear the full interview with Sunsuke on the podcast.

Tim: Since you founded Yukai Engineering in 2007, you’ve had a string of really interesting, creative products.

Aoki: Wow. Thank you. We focus on communication robots. We make things that are fun, but not always useful.

Tim:  Your latest creation, Bocco, you call a “family robot.” What does that mean exactly?

Aoki: Bocco is a small, friendly robot that helps you communicate with your family by exchanging voice messages between smartphones and Bocco. For example, during the day parents work and can leave messages for their kids and when the kids get home, Bocco will give them the message.

Tim: Why can’t the parent just send a text message to the child directly?

Tim: Well, OK, but it seems like there should be something more than that. I’ve lived in Japan a long time, and I’ve noticed that robots have a special appeal in Japan. From anime to movies to products like Bocco and Pepper. Why are these human-like robots so appealing?

Aoki: We don’t think about it, but we interact with robots all the time. Vending machines, ticketing machines, these are all robots.

Tim: Those are great examples, but what is the importance of making robots look and act human?  I’m happy to have my Tivo record my TV shows so I can watch them later, but I don’t want to come home and find my Tivo sitting on my sofa drinking a beer.

Aoki: Right, right. Usually we just want robots to just shut up and do their job. But anthropomorphic robots are not a new idea. Ancient mythologies from all over the world have people creating golems, which are basically robots. Humans have always had the urge to create something like ourselves. I don’t think it’s unique to Japan.

Tim: The Japanese government is putting a lot of money into social robot initiatives, and there is a lot of work being done to develop robots for child care and elderly care. This is a very social and emotional role. Do you think people can form these kinds of emotional bonds with robots?

Aoki: Yes. I think so. Think about pets. We know they are not human, but we form very deep and real emotional bonds with them. Sometimes we treat pets better than we treat people. Also, and this might apply only to Japan, in Shino we believe in kami. That everything has a spirit and a life force, so maybe that makes it easier to accept robots.

Tim: I have to admit, the more I look at this cute robot, the more I understand how a message coming from the robot would have a different emotional impact than reading the same message on a phone.

Aoki: Yes. It’s the emotional connection. In fact, I think that these family robots are the next generation of user interface.

Aoki: These kinds of family robots will be the avatar tor internet of things products. Over the next 20 years, more and more of our home will be controlled by IoT devices. Right now all of these systems have their own UIs. No one wants to learn 15 different operating systems designed by 15 different companies. A family robot would provide a simple, unified way of interacting with your smart home. The fact that it’s a robot makes it feel like a home, rather than an office or a computer program.

Aoki: Possibly, but the last thing you want at home is for the family to be looking at their phones all the time. As soon as you pick up your smartphone you are no longer at home. You are no longer connected to your family, You are alone with your smartphone.  Interacting with a robot UI would be like interacting with a pet. You are not disconnecting from the family when you interact with them. In fact, they can enhance the feeling of being together with the family.

Tim: So controlling your smart home would be a family activity with the robot participating?

Aoki: Yes, exactly. We need to re-think the UI. The design of the smartphone UI is now done. I don’t think we’ll see much progress there. It will stay pretty much the same for the next 20 or 30 years.

Tim:  I know what you mean, once a UI is accepted, it doesn’t change much.

Aoki: Right I still have this old mac from 1991, and the metaphor for the operating system is exactly the same as it is today. Today’s machines are faster, and have pretty graphics, but the way we interact with them is fundamentally the same. Once customers get used to a UI they don’t tolerate change.

Tim:  So the next step is a radical change.? A robot as the UI.

Aoki: I believe it is. Now I just have to figure out exactly how it will work.

Tim:  Traditionally, Japan has been very strong in robotics, but recently American companies have been taking the lead. Do you think Japan will be able to compete and continue to be a world leader?

Aoki: I’m sad to say, that I an skeptical about Japan’s future in robotics. Japan has always been amazing at hardware, but the coming revolution in robotics will be driven by software, artificial intelligence and natural language processing in particular. The US has always dominated those fields.

Tim: If I gave you a magic wand and said you could change anything about Japan to make it more competitive, what would you change?

Aoki: A magic wand?  Japan actually has a large defense budget. The government should use some of that budget to invest in startups and allow startups to create new technologies for the government.

Tim: Like a Japanese version of DARPA? It makes sense. Silicon Valley was originally basically created with US military contracts.

Aoki: Yes, open calls to solve small, specific problems would change everything for robotics in Japan.Companies like iRobot basically lived off of DARPA contracts for 10 years until they could build commercially viable robots. A Japanese DARPA would give innovative Japanese companies a chance to live long enough to develop their technology for commercial use. It would give Japan a chance to lead the world in robotics.

Aoki-san’s suggestion for a Japanese DARPA is a great one, and would be a powerful way to boost Japanese startups. There’s plenty of government sponsored R&D, of course. But, it usually involves allocating specific budget amounts to the same conglomerates to research specific technologies. DARPA’s open model, where anyone is able to compete to find the best solution to a specific problem, is almost unheard of here, but it really shouldn’t be.

Seminars and grants and investments are all good, but the most valuable thing would be for the government to increase the amount of business it does with startups.